Government Of Assam Implementation of Assam Accord

Assam Accord and its Clauses

Clause 5 of Assam Accord : Foreigners Issue

5.2       All persons who came to Assam prior to 1.1.1966, including those amongst them whose name appeared on the electoral rolls used in 1967 elections, shall be regularized.

5.5       For this purpose, Government of India will undertake suitable strengthening of the governmental machinery.

5.6       On the expiry of a period of ten year following the date of detection, the names of all such persons which have been deleted from the electoral rolls shall be restored.

5.7       All persons who were expelled, earlier, but have since re-entered illegally into Assam, shall be expelled.

5.8       Foreigners who came to Assam on or after March 25, 1971 shall continue to be detected, deleted and expelled in accordance with law. Immediate and practical steps shall be taken to expel such foreigners.

5.9       The Government will give due consideration to certain difficulties expressed by the AASU/AAGSP regarding the implementation of the Illegal Migrants (Determination by Tribunals) Act, 1983.

5.5       For the purpose of Foreigners detection and registration Government of India has undertaken suitable strengthening of the government machinery.

There are 100 Nos. of Foreigners Tribunal have been functioning in the state for detection and deportation of foreigners.

6. Constitutional, legislative and administrative safeguards, as may be appropriate, shall be provided to protect, preserve and promote the cultural, social, linguistic identity and heritage of the Assamese people.

A number of actions have been taken under this clause so far which include the following:

7. The Government takes this opportunity to renew their commitment for the speedy all round economic development of Assam, so as to improve the standard of living of the people. Special emphasis will be placed on education and science & technology through establishment of national institutions.

8.1       The Government will arrange for the issue of citizenship certificates in future only by the authorities of the Central Government.

8.2       Specific complaints that may be made by the AASU/AAGSP about irregular issuance of Indian Citizenship Certificates (ICC) will be looked into.

9      The international border shall be made secured against future infiltration by erection of physical barriers like walls, barbed wire fencing and other obstacles at appropriate places. Patrolling by security forces on land and riverine routes all along international border shall be adequately intensified. In order to further strengthen the security arrangements, to prevent effectively future infiltration, an adequate number of check posts shall be set up.

10. It will be ensured that relevant laws for prevention of encroachment of Government lands and lands in tribal belts and blocks are strictly enforced and unauthorized encroachers evicted as laid down under such laws.

Land administration in the Protected Belts and Blocks in Assam is administered as per provisions of Chapter X of the Assam land and Revenue Regulation 1886 and Rules framed there under. Steps had taken for removal of encroachment.

11. It will be ensured that the relevant law restricting acquisition of immovable property by foreigners in Assam is strictly enforced.

The Assam Alienation of Land (Regulation) Act 1980 restricts the acquisition of immovable property by foreigners in Assam.

(The implementation of Clause 10 and 11 is a continuous process. Eviction is being carried out time to time in Forest land, PGR, VGR and other Govt. land).

Clause 12 : Registration of births and deaths

12. It will be ensured that Birth and Death Registers are duly maintained.

Health & Family Welfare Department of the State has taken action. There are 695 centers in the state to issue Birth & Death Certificates. It was decided that Health & FW Department will take steps to computerize the process and introduce an online system of issuing Birth and Death Certificates in a time bound manner.

13. The All Assam Students Union (AASU) and the All Assam Gana Sangram Parishad (AAGSP) call off the agitation, assure full co-operation and dedicate themselves towards the development of the country.

14. The Central and the State Government have agreed to :-

(a)       review with sympathy and withdraw cases of disciplinary action taken against employees in the context of the agitation and to ensure that there is no victimization;

(b)       frame a scheme for ex-gratia payment to next of kin of those who killed in the course of the agitation;

(c)        give sympathetic consideration to proposal for relaxation of upper age limit for employment in public services in Assam, having regard to exceptional situation that prevailed in holding of academic and competitive examinations, etc. in the context of agitation in Assam;

(d)       undertake review of detention cases, if any, as well as cases against persons charged with criminal offences in connection with the agitation, except those charged with commission of heinous offences;

(e)       consider withdrawal of the prohibitory orders/ notifications in force, if any.

Cases of disciplinary action taken against employees in the context of the agitation have been withdrawn and upper age limit for employment in public services in Assam has been relaxed.

15. The Ministry of Home Affairs will be the nodal Ministry for the implementation of the above. 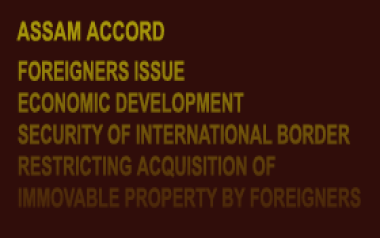